In the book, The History of Loisianna, 1777, it states, dogs were brought to Loisianna from France, New Spain, and the Carolinas. But, the Big Red Bulldog type far pre-dates the French of Loisianna, brought first by the Spanish and Portugese Conquistidors into La Florida (South USA),...

"The barbaric pratice of pitting dogs against bulls, bears and other dogs was just as popular in France as in medieval England. The Douge de Bordeaux was reguarded as a multi-purpose animal. In the Pyreenes and South of France,' one authority tells us, 'It was kept to protect herds of cattle against the depredations of wolves and bears, and accompanied sportsmen on boar and bear hunting expeditions. Spanish mercenaries took many of these dogs with them in the war against Mexico.' If this information is correct, it would certainly appear that the Douge de Bordeaux actually arrived on the North American continent much earlier than is generally conceeded."
A Celebration of Rare Breeds, Cathy J. Flamholtz, 1986

If this "multi-purpose animal" reminds you of Pit Bulls and American Bulldogs - it should. These original French Mastiff type Bulldogs came in variation of size. Spain had long traded dogs with France, (as did England), and South USA was settled first by Spain, and eventually incuded France and England...

"With in many cases light eyes and red noses, and in all cases only slight projection of underjaw had tails which reached in the hocks, represented the English Alaunt as bread in England and Bordeaux in the years 1151/1411."

My Big Red Bulldogs were reconstituted by crossing 1/4 Brindle Bull with 1/2 WEB from Mr Brack of Eastman Georgia and 1/4 Carr White English (white/w red patches).  They are not an Old Family line, rather they are my line.  Further outcrosses to OWE, especially Carr (white with red patches), is expected. 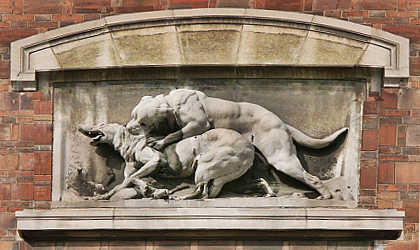 "Originally, they served a dual purpose as war dogs and by guarding flocks from wolves and bears. This was followed by the 'Glory' of combat with bears and bulls. After humane statutes outlawed the torture of the larger beasts, battles of Dogue against Dogue took the place of dog against bull."
The Atlas of Dog Breeds of the World

My Big Red Bulldogs were reconstructed by crossing Brindle Bull with Old White English - they are not of any old lines from Loisianna.