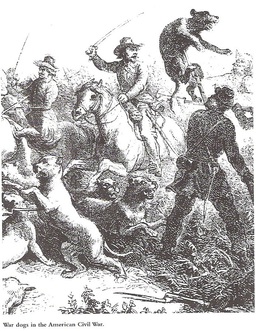 "Wardogs in the American Civil War"
"The author Marius Terentius Varro, who died in the year 27 B.C., reports in his book on agriculture of two kinds of dogs that were bred in this country. The first were hunting dogs and the second large herding dogs, who effectivly protect sheep and goats. From his description of these herding dogs we quote: The lower jaw is undershot. From it grows two teeth, one on the left, the other on the right, which are only slightly exposed...These dogs have large heads and drooping ears, a strong nape and neck...The tail is thick, the bark sonorous, the jaws large; the color usually is white, so that it can be distinguished from predators at night."
Fighting Dog Breeds, Dr. Dieter Fleig
"In this larger variety, used to guard the doors of the houses of the Britions, and to protect their flocks and herds we can plainly trace the mastiff and its superiority over the true molossus."
The History of the Mastiff, M.B. Wynn, 1886

Known as the Shepherd's Mastiff, this type dog of South USA is known commonly as White English....

"Most of the dogs I sent to anybody were for protection dogs, for their chickens and their stock, their families and what have you."
Alan Scott, ABR