"Early cattle and hog farmers wanted a herding dog which demonstrated more toughness and aggression for their not-so-meek stock. (This type supplied the herd owner with a guardian as well.) To create these dogs, herding breeds were crossed with mastiff or flock guard types. This often produced a drop ear (which may be cropped to stand) and a dog with a more robust, muscular build. It also left the tell-tale rear dew-claws, a distinguishing feature of the flock guard/mastiff dogs for many thousands of years. These dogs are often called  'shepherd' instead of 'Sheepdog."
The Atlas of Dog Breeds of the World

The early cattle and hog farmers of USA were the Spanish. Some people seem to think Flock Guards can not be used to hunt Big Game, but any breed that has the grit to fight can be used. We know that in the 15th Century, King Matyas (Mathias) I, used the Kuvasz to hunt wild boar...

"Hunting, however, was never this Hungarian working dog's primary funtion. In Hungary, the Kuvasz is the formost guardian of flocks. Its size and strength, which were advantages in its boar-battling days, were equally applicable to its role as flock guardian."
Canine Lexicon

The Lockhart line of Old White English, the Cane Courso, and the Puerto Rican Sporting Mastiff are all known for their "tell-tale rear dew-claws"..

"Some link the high incidence of rear dew claws in the breed to the old Spanish fighting breeds of mastiff type."
The Mastiffs The Big Game Hunters, David Hancock MBE

Puerto Rico is part of the US, which like South USA, was settled first by Spain. Some also link this trait with the Alpine Mastiff which was also a fighting breed of mastiff type... 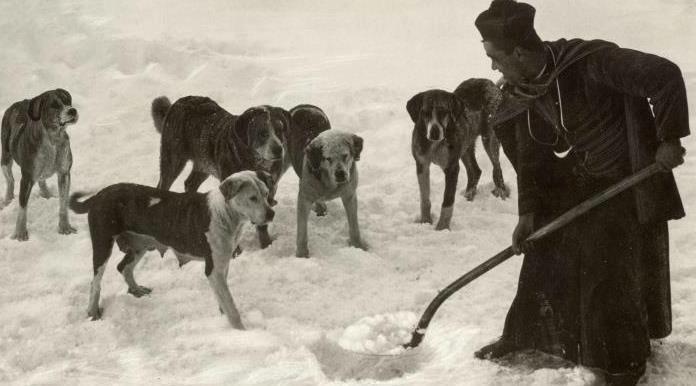 1913 Apline Mastiffs
"We also find another breed closely resembling the Spanish mastiff existing in the Alps, and owing to the similarity in type, there is every reason for believing the old Alpine mastiff was identical with the Alan, and probably derived from Spain...The dog resembles a vast white mastiff, with stop well defined, but somewhat longer in head than the English variety should be."
The History of the Mastiff, Wynn, 1886

Old White English is longer head than the Old English Mastiff (and we find JD Johnson used modern St Bernard as an outcross). The first cattlemen of North America were the Spanish Crackers of La Florida (South USA), where the bulk of the larger Farm Bulldogs are still found. Domestic swine, now gone wild, was first brought by Spanish Conquistidors, like Hernando de Soto, to feed the soliders, along with War Dogs that treated Natives/Slaves like rough cattle and swine or gentle sheep
(depending on the nature of the Native/Slave)....

"The Spanish guard dogs were known to walk straying sheep gently back to the fold, but they were protecting animals they viewed as their own kin. It is difficult to imagine that a dog trained to maim and kill Indians would be able to exercise such judgment."
A Dog's history of America, Mark Derr

Are we to think, farmers/cattlemen of South USA would not make use of these War Dogs "...able to exercise such judgment,"  for farm work? (Spain ceeded Florida to the US in 1821). Are we to believe the English and other white settlers only used stock from England to develop the Old White English? South USA was a Melting Pot before the word was invented. The Herding/Guarding Dogs take commands from the Shepherd/Herdsmen, which also served well in warfare. The APBT is actually more of a herding dog than our larger Farm Bulldogs used for Guard Duty...

"In modern times, the high, curled tail is seen in few of the herding dogs. In fact, many of this group's breed standards specifically mention it as a fault, to eliminate any throwback genes. Most carry their long tails low, and, as a signature of their ancestors, they curve at the end like a shepherd's crook."
The Atlas of Dog Breeds of the World


This "shepherd's crook" is known as "Pump Handle," or "Rat Tail," the APBT differs from the Flock Guard/Mastiff type Farm Bulldogs that carry their thick set tails curled up (on guard). Throwbacks to Guard Dogs of the Mastiff type still occure in the  APBT...

"You're seeing too many big dogs being advertised today weighing 75-80, anywhere up to 100 pounds. They are just not the real McCoy."
Louis Colby

Least we forget, these larger dogs were once the common size found fighting bear in the Pits/Arenas of Bordeaux, as they were in England, perhaps not as a Pure Breed, but they exisisted none-the-less, and it was crosses of these with Terriers that the story was told of the APBT,..

"The barbaric pratice of pitting dogs against bulls, bears and other dogs was just as popular in France as in medieval England. The Douge de Bordeaux was reguarded as a multi-purpose animal. In the Pyreenes and South of France,  one authority tells us, 'It was kept to protect herds of cattle against the depredations of wolves and bears, and accompanied sportsmen on boar and bear hunting expeditions. Spanish mercenaries took many of these dogs with them in the war against Mexico.' If this information is correct, it would certainly appear that the Douge de Bordeaux actually arrived on the North American continent much earlier than is generally conceeded."
A Celebration of Rare Breeds, Cathy J. Flamholtz, 1986

If this "...multi-purpose animal..." reminds you of Pit Bulls and American Bulldogs, it should. Most of the Old Family Red Nose Pit Bulldogs derive mainly from Loisianna, where they existed long before the APBT was cococted in 1898. The French settled Loisianna, however, this type dog was common all over Europe...

"During the European Renaissance, the Great Butcher Dog was common. This more placid mastiff helped drive cattle to market, guarding the livestock as well as the owners, and often carrying the sales money home around his neck!"
The Atlas of Dog Breeds of the World

The Old Farm Bulldogs of South USA were developed just like the APBT...

"For many years, the term 'pit bull' was given to any dog of the fighting pits. The United Kennel Club originally registered these breeds of dogs and, at one time, regulated dog-fighting."
The Atlas of Dog Breeds of the World

"Bill Hines of  Harlingen , Texas, uses his American Bulldogs as hog-dogs, in the classic  medieval catch-dog manner, with all his stock being from old working lines."
The Mastiffs The Big Game Hunters, David Hancock MBE

One of these "old working lines" was the Carr White English, as seen on his video, the dog with two red eye patches running behind a truck (to show endurance). However, this "old working line" is still used to guard farms and livestock, including mine. (See photos below, the Grandson and Grandaughter of Rad's Max-A-Million on Billy Hines video).

"At the time America was in process of colonization, and for years afterward, these dogs were taken from England to the colonies. There  they served as guards for the farm, and  were used in gathering cattle and hogs, which ranged in the woods in a semi-wild
state. These dogs were known at that time as 'White English,' in reference to their origin."
American Bulldog Review, Billy Hines

Least we forget, Spain had started this process of colonization, brought cattle, swine, sheep, and horses as well as dogs to work with them...

"The Spanish still have the word in use under the Spanish form Alano, and curiously enough showing the close relationship between the two breeds, apply it to denote either a mastiff or a bulldog."
The History of the Mastiff, Wynn,  1886

"Great working dogs are bred from because they work, which proves that they are workable. Such dogs would transmit to their progeny the same ability to work even if they had never been used for work; but only the actual work they do, proves their ability to work and enables breeders to know that they can work."
The New Art of Breeding Better Dogs, Onstott, 1977

Since I use my Bulldogs to guard my goats - they are tested for "...protection dogs, for their chickens and their stock, their families and what have you."