"As he says 'It may be doubted whether there were in Britian two races of broad mouthed dogs during the Roman era, but it seems to us there was but one, and in that case the bulldog was the animal in question, one indeed far superior in size to the present breed, little inferior to the mastiff, and probably very like the Cuban race.' The latter he describes as follows: Larger than our common bulldog and smaller than the mastiff, stout in proportion, muzzle short, broad, and abruptly truncate, with somewhat of an upward curve, lips pendulous, ears partly so"
The History of the Mastiff, Wynn, 1886 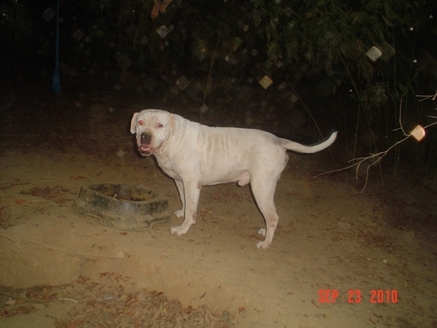 Marsh is very large due to the crossing of strains, Carr x Lockhart. The Carr line is very tightly bred and has reached the Bottle Neck, thus an outcross was needed to continue the strain. Many outcrosses were tried, but would not Click, however, Mr Lockhart of Georgia must be given credit to the breeding of Marsh.

"The author Marius Terentius Varro, who died in the year 27 B.C., reports in his book on agriculture of two kinds of dogs that were bred in this country. The first were hunting dogs and the second large herding dogs, who effectivly protect sheep and goats. From his description of these herding dogs we quote: The lower jaw is undershot. From it grows two teeth, one on the left, the other on the right, which are only slightly exposed...These dogs have large heads and drooping ears, a strong nape and neck...The tail is thick, the bark sonorous, the jaws large; the color usually is white, so that it can be distinguished from predators at night."Fighting Dog Breeds, Dr. Dieter Fleig, 1996


"In this larger variety, used to guard the doors of the houses of the Britions, and to protect their flocks and herds we can plainly trace the mastiff and its superiority over the true molossus."
The History of the Mastiff, M.B. Wynn, 1886

White English are not English, they are American made Shepherd's Mastiffs used by farmers decending from early Spanish importations. I linebreed on the Old Family bloodline known as Carr, which has been used by breeders like John Conners, Billy Hines, and Lockhart. Only pups at least 7/8 Carr or better, will be noted as CWE (Carr White English).  I use an outcross of Lockhart White English. GG Marsh was bred by Mr Lockhart and is half Carr. Dixie is full Carr (the grandaughter of Rad's Max-A-Million on Billy Hines video). I bred GG Marsh to CWE Dixie to produce OWE Diva (3/4 Carr). I will continue to linebreed on Lockhart/Carr, which will provide an outcross to the Carr White English.
The Lockhart name is of coincidental historical interest to the Georgia Giant type (OWE of Gerogia USA over 100lbs)...

"In Lockhart's Ancient Spanish Ballads mention is made of a mastiff that belonged to Don Pedro the cruel, Vide 11, 12, 13, and 14 verses of the xxii. balled, entitled 'The murder of the master of St. Jago,' which took place at Sevile in 1358. I have not seen the original Spanish version, but the particulars mentioned in the balled show that a mastiff and not a small bulldog was meant."
The History of the Mastiff, M.B. Wynn, 1886

Cuba supplied the Spanish forts and settlements of La Florida (South USA), where it is said, the Cuban Mastiff closely resembled the 16th Century English Mastiff, however, most likely, this breed, while the for-runner to White English in South USA, developed from various imports used to guard cattle (a term for all livestock)

"Col. H. Smith in Naturalists Library, states that he was informed in the West Indies by some cattle dealers, who cultivated the breed, that the Cuban  mastiff was introduced from England about 1560, and that they were first kept at a monastry in the ancient capital of St. Jago, according to accounts recieved from a priest by the cattle dealers who informed Col. H. Smith."
The History of the Mastiff, M.B. Wynn, 1886

Since the Mastiff already existed in St. Jago, most logically, the Cuban Mastiff and our Old White English were developed from crosses of the English Mastiff, Spanish Mastiff, and other imports (Italy/Sically, Portugal, France, Ireland, ect,...).  I have never seen nor heard of a female White English over 100lbs. I will attempt to breed a pure strain of Gerogia Giants from the Lockhart/Carr cross, however, heart/temperment (rather than size) will dominate my selection of type. (See also GENETICS and SIZE)